I’m sure you’ve heard that LED lights are the way of the future, replacing incandescent bulbs at an astonishing rate. One concern some may have is whether LED bulbs are compatible with all types of light fixtures – will they work in any fixture?

LED bulbs will work in any fixture they’ll screw into, but it’s not advisable to use LED bulbs in enclosed light fixtures or dimmers designed for incandescent bulbs. Using LEDs in these types of fixtures will shorten their effective lifespans and they won’t work very well.

As an affiliate, I may collect a share of sales or other compensation from the links on this page.

In this post, I’ll be going over basic information about LED bulbs, including where they’re best used and where you should probably avoid their use.

Why Are LED Bulbs Getting So Popular?

LED bulbs have become more popular than incandescent lights for one simple reason: they’re more energy-efficient than regular incandescent bulbs. Those old bulbs would produce 90% heat and about 10% light for the large amount of electricity they used.

In comparison, LED bulbs use about 75% less electricity than incandescent lights – plus there’s the fact that LED bulbs barely produce any heat.

The U.S Department of Energy estimates that widespread use of LED lights can save upwards of $30 billion in electricity by 2027. Considering that much electricity in the U.S is produced by fossil fuels, using LED lights is considered a ‘green’ lighting alternative compared to old bulbs. Plus, who doesn’t want a lower electric bill?

LED lights produce little heat as a by-product, as evidenced by how you’ve probably never burned your hand on LED Christmas light bulbs, and they’re typically made with plastic-type materials. This means less hazard of the bulb shattering or burning someone because it’s too hot; both of which have occurred with glass incandescent bulbs.

LED lights are directional, meaning they provide focused light from the electricity they take to run. This light has been proven ideal for flashlights, recessed kitchen and office lighting, decorative lights, and more. Grocery stores and other big box stores typically have LED lighting because of its greater efficiency.

Perhaps the most useful feature of LED bulbs is that they have much greater lifespans than traditional bulbs and can last decades with little chance of burning out. The less maintenance and upkeep, the better, right?

What Fixtures Can LED Bulbs Be Used In?

LED bulbs can typically be used in any lighting fixture an incandescent bulb would work with. Room lighting, track lighting, or recessed kitchen lighting are all great ways to make use of LEDs with a penchant for directional light.

A note about LED bulbs is that while they don’t produce nearly as much heat as old-school light bulbs, they aren’t perfect and do produce some heat. For this reason, it’s generally advisable to use LED bulbs in open-air light fixtures. I’ll be discussing this topic in detail later, too.

Otherwise, LED lights are the lighting of the future. There’s simply no real reason to continue using old energy-hog incandescent bulbs when LEDs are compatible with nearly anything and produce dramatic energy savings versus their competitors.

Can LED Bulbs Be Used in a Closed Fixture?

LED bulbs can technically be used in a closed fixture, but it’s generally not a good idea as there’s nowhere for the heat produced by the bulb to escape to. That heat builds up and ultimately causes the bulb to burn out a lot sooner. A shortened lifespan and the chance of heat damage make it risky.

There are lots of specially made enclosed LED light fixtures that are specifically created to allow the bulb to disperse heat and retain the aesthetic effect of an enclosed light fixture. It may be worth looking into these before changing using an LED bulb in a traditional enclosed fixture.

Can LED Bulbs Be Used in a Dimmer?

LED bulbs can’t be used in a dimmer. For electrical reasons, they won’t work with old-school dimmable light fixtures. Incandescent bulbs use more electricity than LED bulbs, so the power has to be adjusted in a very specific way that evenly dims the light on command.

Because LED lights draw much less power, they require dimmers specifically made for LEDs. If you tried to use an LED in an incandescent dimmer, it wouldn’t dim right and may not work at all. Similarly, incandescent bulbs wouldn’t work very well if plugged into a dimmer made for LEDs.

LED bulbs’ energy efficiency makes them the way of the future. With 500 million bulbs being used today, incandescent bulbs are effectively being made obsolete. Special LED enclosed fixtures and dimmers make LED bulbs even more versatile. 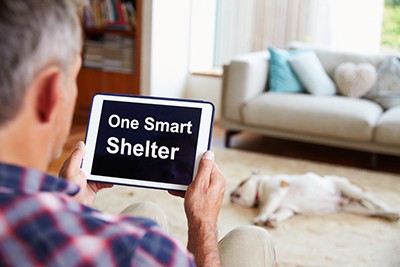 Hi, I’m Carl. I’m the owner and founder of One Smart Shelter. The aim of this website is to offer knowledge and easy solutions for home automation.

This site is a participant in the Amazon Services LLC Associates Program, an affiliate advertising program designed to provide a means for sites to earn advertising fees by advertising and linking to Amazon.com. We are compensated for referring traffic and business to Amazon and other companies linked to on this site.